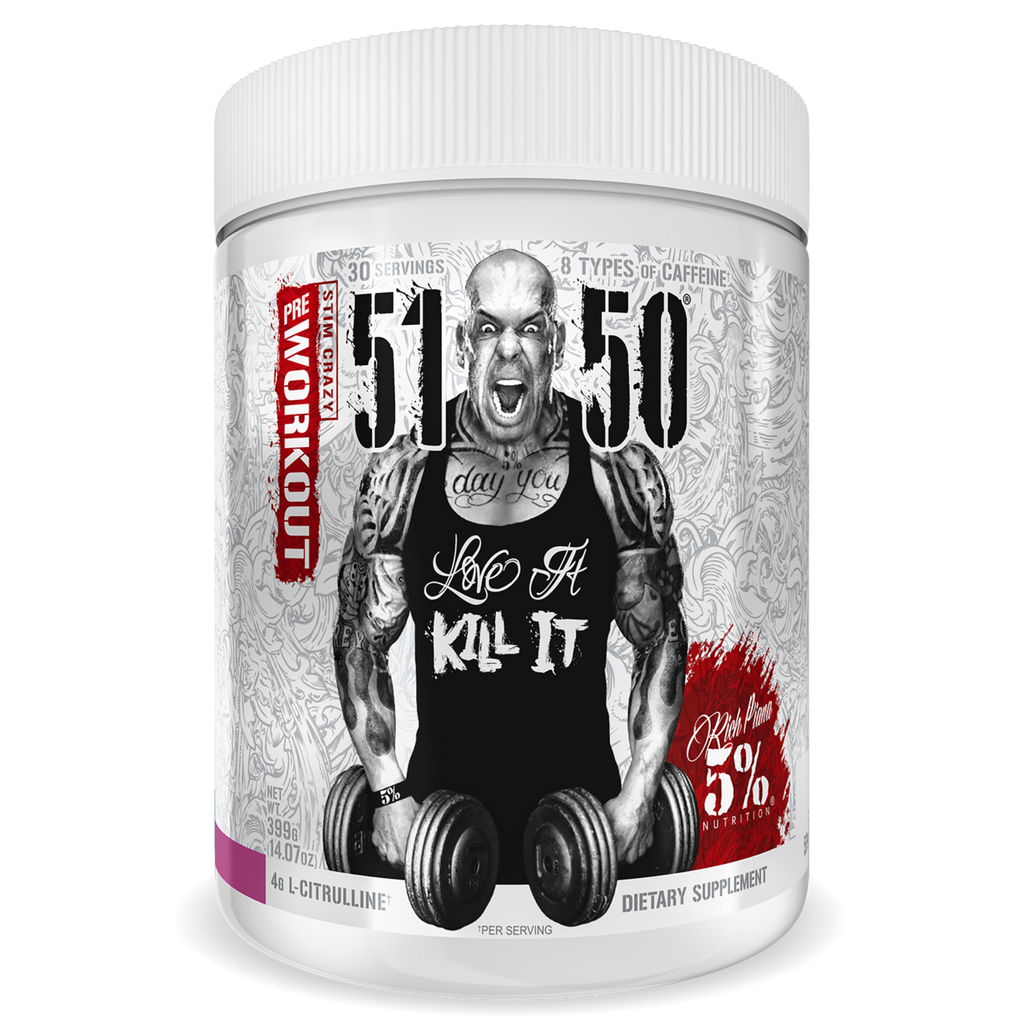 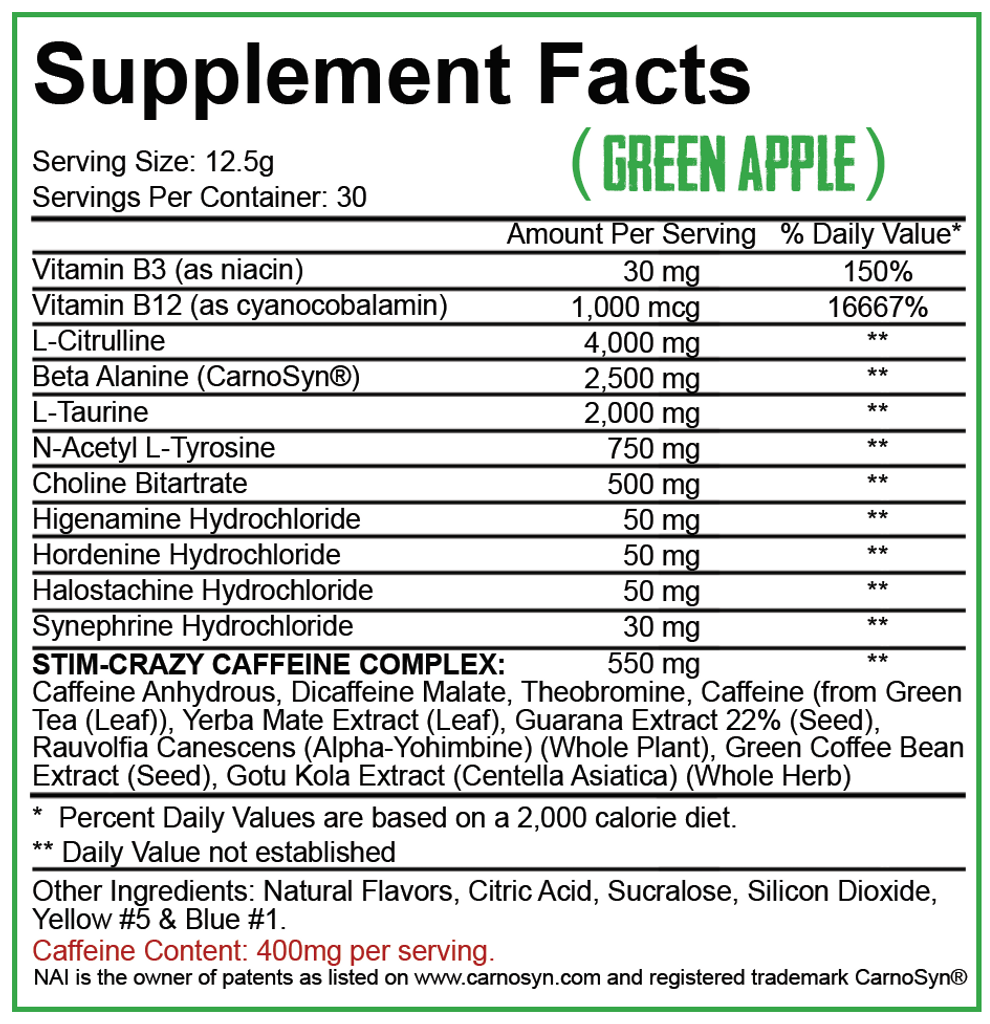 Is your current pre-workout just not strong enough, despite all the hype? If you need more than one scoop of their crap, then it’s time to try 5150 – the ultimate stim crazy pre-workout – this explosive pre-workout is designed and dosed to give you energy and results like no other product currently on the market. 5150 goes beyond super energy; it will give you extreme pumps, razor-sharp focus, intense motivation, and extended endurance.

Beta-Alanine – 2 Grams
This well-known ingredient works indirectly to buffer acid and reduce fatigue by increasing levels of carnosine in the working muscles thereby allowing you to push your reps and sets deep into the growth zone. Carnosine consists of the amino acids beta-alanine and histidine, occurs naturally in the body, and is one of the primary compounds that buffers acid in working muscles.(2)

L-Taurine – 2 Grams
Taurine seems to be in quite a few supplements lately, almost always pre-workouts and energy drinks. Taurine is a conditionally essential amino acid found predominantly in the brain, heart, and skeletal muscles of the body. Taurine reduces the nerve impulses in the brain that increase blood pressure, thereby reducing resistance to blood flow. Additionally, Taurine acts to increase muscle cell volume by helping to draw water into the muscles.(3)

N-Acetyl L-Tyrosine – 750 mg
This is the most bioavailable form of Tyrosine available which means a smaller amount is all that’s required to get the job done. Tyrosine is a very popular cognitive enhancer that increases levels of the neurotransmitters noradrenaline and dopamine. Increased levels of these neurotransmitters improve mood and focus while relieving feelings of anxiety as well as stress.(4)

Choline Bitartrate – 500 mg
The mind-muscle connection is one of the “holy grails” of bodybuilding, indeed your connection with your working muscles during a workout makes the difference between a great workout and a waste of time. Choline is an ingredient that promotes cognitive function, including an improved mind-muscle connection.(5)

Higenamine Hydrochloride – 50 mg
Higenamine, also known as Norcoclaurine, has an extended history of use in traditional medicine as an anti-asthmatic. In more recent years you will find it in stimulant based pre-workouts as well as stimulant-based fat loss products. Higenamine is a beta-receptor agonist similar to Synephrine that increases production of noradrenaline which in turn stimulates the “fight or flight” response that leads to enhanced focus and concentration.(6)

Hordenine Hydrochloride – 50 mg
Hordenine is a popular nootropic that’s derived from Bitter Orange and acts as a beta-2 adrenergic agonist similarly to Higenamine, which means that it increases energy and focus.(7)

Halostachine Hydrochloride – 50 mg
Halostachine is a metabolite of PEA (Phenylethylamine), which is a compound found in cocoa beans known for its “feel-good” mood elevation effects.(8) Additionally, Halostachine acts as a beta-adrenergic receptor agonist similar to Synephrine. Like Higenamine and Hordenine, Halostachine stimulates the “fight or flight” response.

Synephrine Hydrochloride – 30 mg
Synephrine is the original replacement for Ephedra and is popular in both fat burners as well as many pre-workouts. Like Higenamine, Hordenine, and Halostachine, Synephrine acts as a strong beta-receptor agonist in the body which means increased energy and focus.

Stim-Crazy Caffeine Complex – 400 mg
As you can see, 5150 features a very potent energy and focus ingredient profile that also includes a high dose (400 mg!) of Caffeine from 8 different sources: Caffeine Anhydrous, Dicaffeine Malate, Theobromine, Green Tea, Yerba Mate Extract, Guarana Extract, Green Coffee Bean Extract, and Gotu Kola Extract. This is a precise combination of Caffeine sources that is designed to create smooth, extended energy while effectively eliminating the jitters or crash that happens with most high caffeine pre-workouts. This complex also includes Rauvolfia Canesens, a source of Alpha-Yohimbine, which is another stimulant that’s common in fat loss products and some pre-workouts.

5% Nutrition- All Day You May